what you’ve got is perfect

Posted on September 19, 2013 by bethanywheeler

I was doing some work in the garden recently and was finding jobs for my 3 year old to do in the interests of keeping him occupied. I passed him a trowel and showed him which were the weeds that needed digging up, and which were the plants I wanted to keep.

He got going on the weeds and said “why do you not want these mummy?” I replied, “because they’re weeds”. Like a good toddler his questioning didn’t stop there…”Why don’t you want the weeds mummy”…Why did I not want the weeds? I don’t know! When I looked at them closely they were actually quite pretty.

It got me thinking, what is a weed, and why don’t we like them? The definition of a weed is “A plant considered undesirable, unattractive or troublesome, especially one growing where it is not wanted”.

A couple of days later, my boy was out in the garden again and he came in to find me and presented me with this… 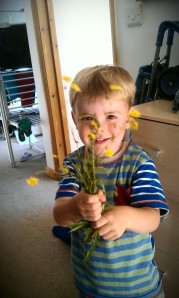 Suddenly these weeds were the most beautiful thing I had ever seen – because they had been chosen and picked for me.

The plants themselves aren’t much, you certainly wouldn’t pay anything for them in a garden centre. But used in this way made them beautiful. They were perfect.

How often do we write things off, write people off, ourselves off, because we regard them as useless? As ugly things. But as with weeds, all things can be used in ways that make them beautiful.

The old adage, “beauty is in the eye of the beholder” is also relevant here. I’m very aware that not everybody is quite so smitten with my son as I am(!), so part of the reason my heart melted so is because of how I feel about him.

And that is only a fraction of how God feels about me, about you. So no matter how ugly some things about me are, if I bring him an offering with the same intent as I was brought these limp weeds, his smile will be as big as mine was.

What do these offerings look like? It’s my thanks for the good in my life, its my gestures of love to other people, its those times I act selflessly for the sake of someone else. These are all I can offer in response to what God has given me, of what he has done for me.

The danger is when we don’t bring these at all because we think they’re not good enough, because we haven’t got it together. But we don’t have to have it together – the whole point of needing God is the fact that we don’t.

So, bring your weeds and don’t listen to the voices that tell you it’s not enough. Because it is.

I'm Bethany, a thirtysomething wife and mum. I love my family, my friends and my church, and I'm passionate about being part of them becoming all they were created to be. I'm a talker. Hopefully I listen in equal measure. I love a good debate about real stuff, but only if it results in a list of actions!
View all posts by bethanywheeler →
This entry was posted in Uncategorized. Bookmark the permalink.